Being gluten-free can be challenging. Oftentimes, we lose some of our favorite foods, or just the joys of just baking and cooking our past time favorites. You’ve had to retire your waffle iron. Place it in the back of the cabinet, in a drawer, wherever. You take it out every now and then for a brunch or two, and let out a sigh as you watch everyone partake in a sweet, doughy, crisp homemade waffle but you. You find gluten free frozen waffles, but they just aren’t the same as freshly making them. Now what if I told you it didn’t have to be this way. That you could have fresh, healthy, easily made allergen-free and totally customizable gluten-free waffles in only 9 minutes using our gluten-free flour blend. Not only is our flour blend delicious, but also top 9 allergen-free! Perfect for a family brunch, especially if your family is allergy or dietary restriction ridden.

Can I freeze these waffles?

Guess what... This recipe takes only 5 minutes of prep, and 4 minutes of cooking. Almost the same amount of time as a frozen, store bought waffle. Our gluten-free waffles are freezable as well! If you need to get ready fast and desire waffles ever so desperately you can make them in bulk and then freeze them for up to 3 months- perfect for quick mornings (or late nights).

Now topping-wise, you can really lead these waffles to ascension with a few different takes. You could go the traditional route with berries, whipped cream (dairy or non dairy) and syrup. Or  you could opt for something special like chicken and waffles, or some fried apples and ice cream.

Although this recipe contains both eggs and milk, it can be easily modified to be made either egg or dairy free- or both. For the egg, you can simply use a store bought egg replacer, or make a chia or flax egg. All that’s required for that is a tablespoon of chia seeds or ground flax meal, and two to two and a half tablespoons of water. Keep in mind these homemade remedies take about 10 minutes to set, so plug that into your morning schedule if you plan on running around the house. Milk-wise, you could substitute dairy milk for just about anything. Oat, almond, soy, cashew, hemp options exist that are labeled gluten-free, just be sure to read the label. You can also make homemade almond milk (although not nut free) by using almonds and water and putting it into a blender. For every cup and a half of water, add two tablespoons of almond butter, and then blend for roughly 3 minutes.

Waffles have been around for hundreds of years. In fact, the first record of a waffle iron with its traditional pattern appeared in the 1200’s. Both the poor and rich alike were eating waffles back in England. Stories say, early Americans even threw parties exclusively for eating waffles, called waffle frolics. These gatherings would include varying meals orbiting the central platter of waffles.

This recipe requires very little ingredients, with the majority of it being varied cooking items you already have at home. It’s a low mess affair, with only two messy bowls and a waffle iron to be later cleaned. The recipe also takes little to no extensive kitchen experience. You just have to be able to mix the batter and then put it into the iron following the recipe instructions.  It’s super simple and fun. You could even force your children to do it for you if you so desire… (You do.) So try it out! Your friends, family, and kids will love it. Don’t forget to leave a review and share! 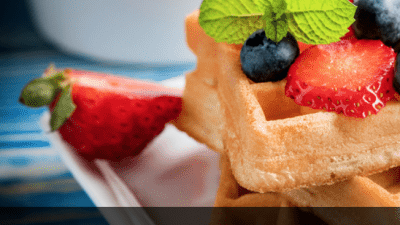